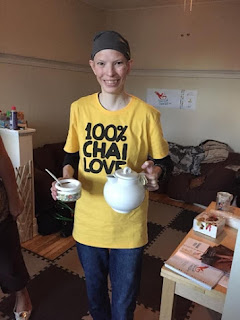 Samantha Wexler had become so much a part of my life .

Ever since we met at the Vienna New Horizons years and years ago we had just hit it off . She had a rare cancer . Wild-type GIST an even rarer type of GIST . What I thought then was how she was so very young.  We became close because every time I visited Montreal to see my son and family we would meet . I became a part of her charmed circle - her sweet husband and dog and her life as a student in Concordia and I also saw her become a powerful voice in her community of GIST patients.

She was pursuing her doctorate in the Dept of Art History with so much passion and dedication . Her subject was the role and presence of and reference to the mythical Unicorn in various forms of art and literature.

You could not think Sam and not think of those elegant, beautiful creatures and vice versa . There was something so ethereal about her too . So gentle , so waif like , so sensitive . But she was pure steel inside .

Her GIST became aggressive . Her treatment too , equally aggressive and toxic . Her disease progressed and became metastatic and she had to stop school . But she wasn’t ready to sit and do nothing . She began to do stuff online . She became her own model and started a Make Up Show & Tell page on Facebook . She sold exciting stuff demonstrating it all herself - I would be amazed at her strength and courage as day after day there would be live demonstrations- her chemo ravaged face would glow , her eyes shine with fierce determination and her lips pout tellingly in the brightest red lipstick . Her lost to chemo hair began growing in wisps , then they shaved it off for her craniotomy but she was out there . And she looked so beautiful . So powerfully beautiful . All you saw was how she kept herself engaged and making the most of what resources she had.

It broke her heart to stop going to University.  I’ve seen her with all her Unicorn research paraphernalia. So much joy it gave her . Such a purpose in life .

In the midst of all of this , she and Richard hosted a Chai for Cancer Adda at their warm and cosy little pad in Montreal . Richard ! What do you say about a boy friend , a husband and a care giver like him ? I have no words . His whole world and life revolved around Sam .

And then it all became too much . On Instagram she opened a window for us to look at the view from her hospital room that she was in more frequently now . To also look into the window of her own mind and soul.

And then it became worse . They had to open up and look at what was happening inside her brain . She let them do all of it .

Hers was a rare disease and her version even rarer . We will learn about it together she said. Today she’s gone but left her body to medical science so we continue to learn more about how and why it did what it did to her .

I had breakfast with Sam and Richard in June . That’s the last time I saw her. That stolen weekend in Montreal end June this year , the beginning of summer . The sun streaming in and enveloping us in its lovely golden glow . I had taken her a shawl , a cream confection with little red hearts woven all over it . Richard had laid out a table fit for two queens.

We bit into the warm, crisp , buttery croissants and talked and laughed . I knew I would not see her again . You know that . It was hard to miss .

What I will miss is our annual meeting at the Second Cup at St Catherine’s - sometimes the more than once a year rendezvous when after my mandatory Montreal hair cut at Zap I would pose and preen to get Sam’s approval. Over steaming cups of chai ! Whether it was winter or summer.

She loved my cropped hair . Ah she said, maybe we will grow our hair back together ...

Posted by Viji Venkatesh at 5:46 AM

My life and I

A photo is but another memory

Links to my favorite places on the web